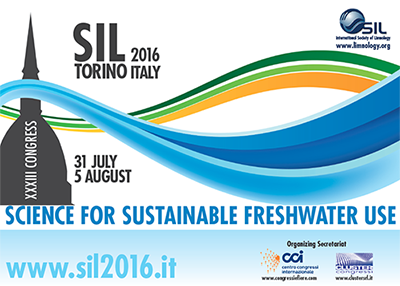 The International Society of Limnology will held its XXXIII Congress in Turin, from 31 July – 5 August 2016. LifeWatch Italy will play an active role in the congress feeding the scientific debate with a special session focusing on Alien Species.

Alien species are considered one of the major threats to ecosystems and to endangered species and are extremely difficult to be managed after their establishment. Therefore, scientific efforts should be directed to understand the mechanisms underlying alien species success. To this respect, making data and tools readily available, through appropriate activities of e-Science, appears crucial to address emerging issues and open up new perspectives for a better understanding and wiser conservation and management of biodiversity. Within this context, LifeWatch, the European Virtual Biodiversity Research Infrastructure, has the commitment to become a reference for researchers, policy makers and public authorities. Recently, it has promoted a European-level case study designed to assess the vulnerability of ecosystems to alien species. LifeWatch endorses this SIL session, with the aim to contribute achieving a better understanding and managing of biological invasions, along different perspectives, from genomics to macroecology. Three main issues will be addressed, from single species, to individual populations and whole ecosystems: i) the state of the art of biological invasion in freshwaters, ii) the comparison across typologies (from inland to coastal marine aquatic ecosystems), iii) the e-Science approach to alien species impacts.

Should you wish to participate to the conference, the call for abstract is open until 1 February 2016.