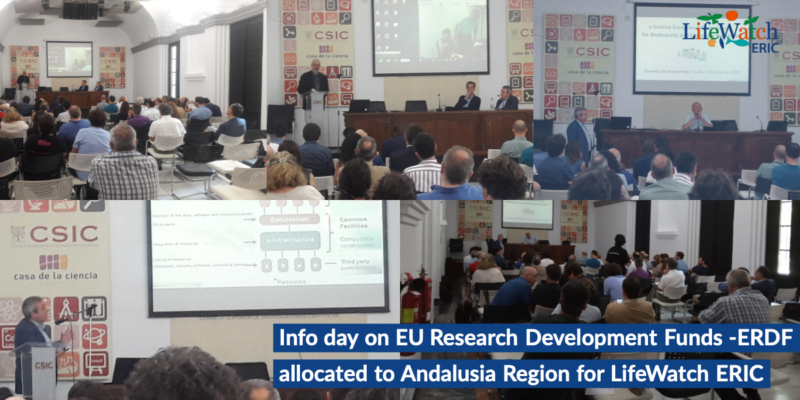 LifeWatch ERIC held its open info day on 4 June 2019, in the Consejo Superior de Investigaciones Cientificas (CSIC – the Spanish National Research Council), in Sevilla (Spain), on European Research Development Funds -ERDF – for the Andalusia Region. The focus was on the resources allocated for LifeWatch ERIC on the programme. Through this networking event LifeWatch ERIC aims to identify and highlight key directions to boost research in tight collaboration with its Communities of Practice at pan-European and regional levels.

The many contributions scheduled during the day aimed at delivering a clearer picture of the potential and applications for research that LifeWatch ERIC brings, from smart and remote sensing, to supercomputing and data interoperability, from data management, the semantic web and Big Data, to deep learning and Artificial Intelligence. Cloud computing services such as Virtual Research Environments, IaaS, PaaS and SaaS featured consistently.

The event demonstrated integration and synergies with specific projects, such as EOSC, IBER-GRID and IBERLIFE, GBIF and networks like EU-CELAC and BIODIVERSA. Connections with the institutional actors were also at the heart of today’s programme with particular reference to the Environmental information system of Andalusia (REDIAM) and the Spanish cadastre of biodiversity (IEPNB). Last but not least, a wide space was left for the presentation of case studies and Q&A, with a full session dedicated to the technical aspects and project teams.