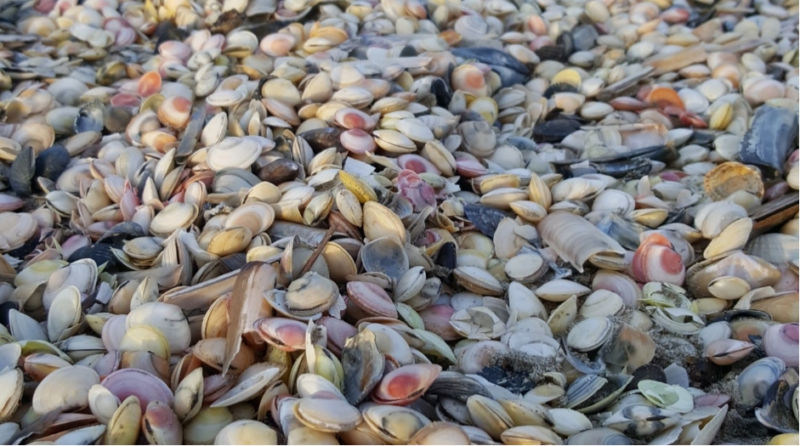 On Sunday 14 March 2021, the fourth edition of the Big Seashell Survey took place along the Belgian coast as part of the LifeWatch programme. This unique citizen science initiative has been organised every year since 2018 by the Flanders Marine Institute (VLIZ), EOS, Natuurpunt, the Province of West Flanders, the Strandwerkgroep, Kusterfgoed and the ten coastal municipalities.

Across the board, at least 1,100 people took part in the Big Seashell Survey and together they counted and identified 40,000 shells. Of the 47 species encountered, for the first time the Baltic tellin (Macoma balthica) appeared to be the most numerous, with 29% of all shells found. The rest of the top six remained unchanged with cut through shell (23%), cockle (19%), blue mussel (10%), banded wedge shell (4%) and Atlantic jackknife clam (3%).

It is striking that two thirds of all Baltic tellin were found as whole shells, composed of two hinged parts of valves. This points to a recent die-off in the shallow coastal waters. The massive beaching of these Baltic tellin can possibly be linked to the rough weather conditions of the past weeks. The percentage of whole shells was high for the pullet carpet shell (70%), the blue mussel (63%) and the Atlantic jackknife clam (57%) as well.

This is in sharp contrast to the cut through shell and the cockle, in which whole shells occurred in only 2% of all specimens. Shells of these two species found on the Belgian beaches are mainly fossils. As witnesses of a distant past, their shell valves have been separated over time.